skip to main | skip to sidebar

After almost 3 full days of celebrating a real Indian Wedding I feel like I have truly loved the whole experience.

Starting with the foundation established by a large family who really loves each other and built with a very rich culture on top, the wedding has been nothing short of fascinating.

Our first party was an unofficial family get together. Where the groom's family, who find themselves living all around the world, got together for the first time in many years to start catching up. This took place in a farm close to a beach, we took our time meeting each other over pizza and hanging out by (and in) the pool to fight off the heat, while the women in the party got henna tattoos done. That night the bride's family and friends joined us for a fun outside dinner of vegetarian Indian fare. Out of all the wedding celebrations this was the only one where alcohol was served, which as I'm told is very common in south Indian weddings, and completely different from their North Indian brethren. During this first dinner hosted by the groom and his family a lot of family celebrations were highlighted including multiple milestone birthdays of cousins, uncles and grandparents. I should highlight that most of the 40 people I met that morning were cousins of the groom. The celebration was full of funny family moments and a few emotional ones. It was a great introduction to the family we'd be sharing the next few days with.

The second morning there was a very early, solemn ceremony to which the groom recommended I skip since it was fairly long (3 hours approximately), and most of his family would also be skipping since it was completely in Sanskrit and the essence of it would be repeated throughout the next couple of days. So in true form for my family background I went shopping for clothes to wear over the next couple of days. I bought a traditional short sleeve Kortu to wear during the second night for the engagement ceremony and a long Kortu to wear for the main wedding ceremony during the third day.


As we arrived in the afternoon to the wedding venue we were welcomed with an "afternoon snack", which was delivered in the traditional South Indian wedding meal format of a bamboo leaf that was used as a plate and place setting and different tasty dishes served directly on top of it by the line of waiters that would keep refilling the dishes until one begged them to stop. The food consisted of some rice and/or noodles, naan (bread) surrounded by different sauces, chutneys or other fixings, which people used their hands to mix and eat. As this was my first time eating this way I was lucky to be handed a spoon to better enjoy my snack.

During the second day in the afternoon the wedding officially began for us with the traditional engagement ceremony. During this ceremony the groom is welcomed into the wedding hall and in our case Karthik arrived on a horse driven carriage led by all his friends and family dancing in front of him to set the tone for the happy festivities.

Upon the groom's arrival into the wedding hall his bride-to-be is brought out and the go onto the stage together where the ceremony is to take place between the families and the hindu priests. The ceremony is steeped in traditions and there's a long list of activities that took place throughout, to set the stage for the wedding terms. This included gift exchanges between the groom and bride's families and it finished with the announcement of the wedding details including the precise date and time for the marriage ceremony to take place. In this case the time for the ceremony is very specifically defined by the astral charts of the couple, so this is different for every couple who weds. 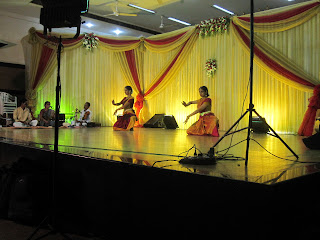 After the traditional portion of the ceremony we were treated to a beautiful dance show that was put on by Karthik's sister and aunt who had trained for years in dance. As it turns out this was the first time they both danced together, in his aunt's case she hadn't done an actual dance show for 19 years, but the show was so great we couldn't tell.

At the end of the show we proceeded to eat another dinner served on a bamboo leaf, before heading back to our hotel to get a bit of rest, since the 3rd day of the wedding was scheduled to start very early for us in order for the ceremony to take place by the scheduled time...
Posted by Funny Life at 8:45 AM


Thank you for the good writeup. It in fact was a amusement account it. Look advanced to far added agreeable from you! By the way, how can we communicate? gmail login